Osteoporosis – The More You Know 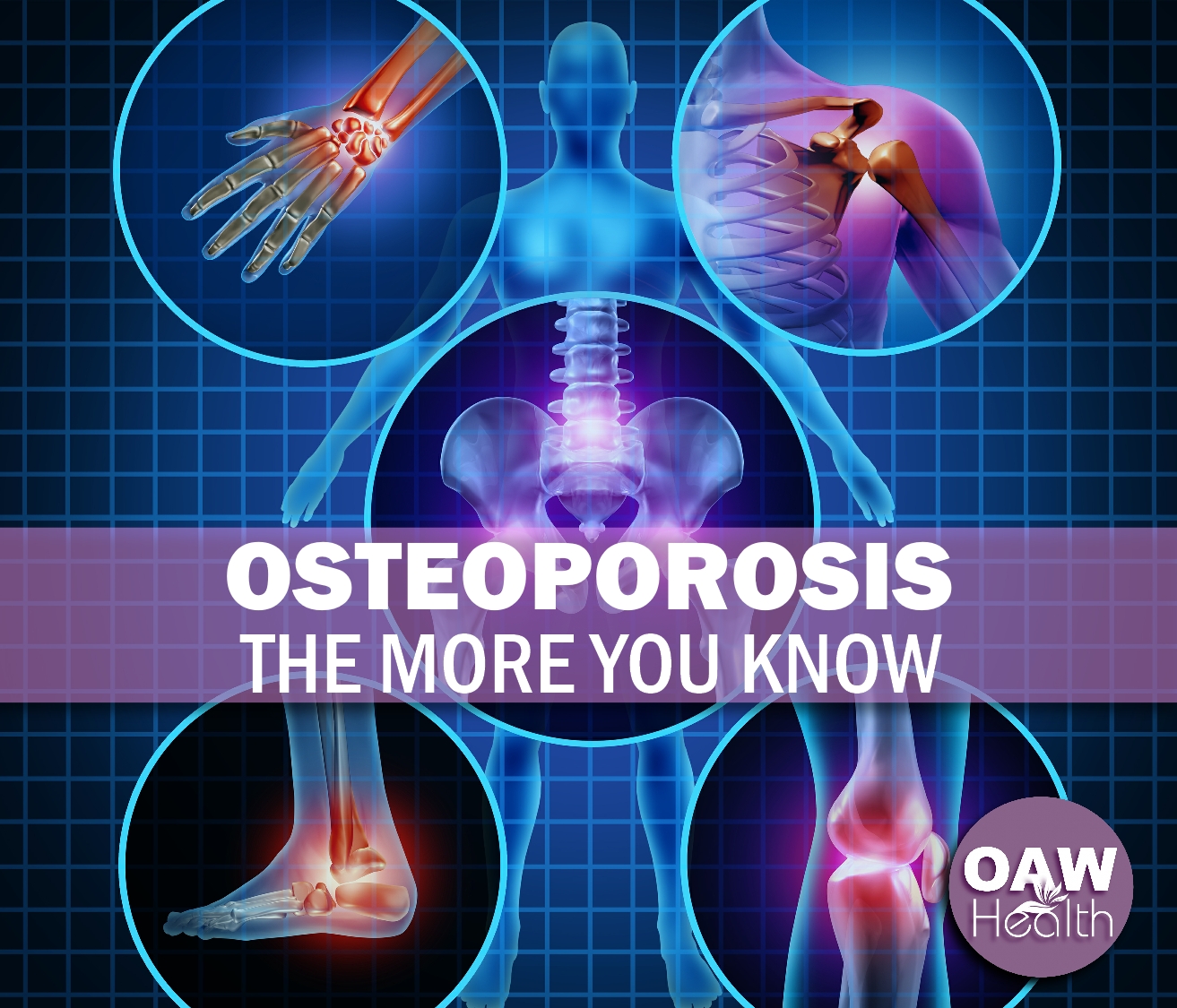 Osteoporosis has become a very widespread health concern. Osteoporosis and low bone mass are currently estimated to be a major public health threat for almost 44 million U.S. women and men aged 50 and older. It is linked to 1.5 million bone fractures annually with the most common fractures being those of the hip, spine, and wrist. For the year 2000, there were an estimated 9 million new osteoporotic fractures, of which 1.6 million were at the hip, 1.7 million were at the forearm and 1.4 million were clinical vertebral fractures. Europe and the Americas accounted for 51% of all these fractures, while most of the remainder occurred in the Western Pacific region and Southeast Asia.

Osteoporosis literally means “porous bones.”  It occurs when bones lose so much of their mass and strength that they become weak, brittle, and very susceptible to fractures. Osteoporosis is sometimes called the “silent disease” because many patients are not even aware they have it until they experience a bone fracture. Sometimes a minor movement such as a sneeze or a cough can cause a bone fracture in folks with advanced osteoporosis. The condition is found most often in post-menopausal women, but from age 75 and beyond, it is equally common amongst men and women.

Many of the hip and wrist injuries are the result of a fall. Broken hips require major surgery and can be very risky for senior citizens. Spinal fractures can lead to loss of height as the vertebrae collapse on themselves. This is the cause of the hunchbacked appearance of some elderly folks, especially women. Sometimes this condition is called “widow’s hump” or “dowager’s hump.”

Bones are composed of a dynamic living tissue that is constantly changing. In a process known as remodeling or bone turnover, old bone tissue is broken down (resorption) and new bone is produced to replace it (formation). These cycles repeat every 2-3 months. Resorption utilizes specialized cells calledosteoclasts, and formation involves cells called osteoblasts. During childhood and the young adult years, more bone is produced than removed, and the body reaches maximum bone density and strength at about the age of 35. After that, the process begins to reverse itself, and the body slowly loses bone mass faster than it gains it. This is part of the aging process, but most osteoporosis occurs when this process happens faster than normal. This is known as primary osteoporosis. When osteoporosis occurs due to other health conditions it is called secondary osteoporosis.

What Are the Risk Factors for Osteoporosis?

There are quite a few factors that can increase one’s chances of developing osteoporosis. Let’s discuss the most common factors.

Race.  Caucasians and Asians have the highest incidence of all races. African Americans and Hispanics are still susceptible to osteoporosis, but their risk is less.

Frame Size.  If you are thin and small-boned, your risk is higher because you have less bone mass to begin with. Shorter people also have a greater risk for the same reason.

Family History.  Researchers are not quite sure of why, but if you have a parent or sibling with osteoporosis, you have a better chance of getting it than if you do not. Another interesting statistic is that if you also have a family history of bone fractures, your risk for osteoporosis is even greater.

Exposure to Estrogen.  The more a woman is naturally exposed to estrogen, the lower her risk is. For example, if she begins to menstruate earlier than normal or has a later than normal menopause, her risk is decreased.

Other Disorders.  There are a number of other medical conditions that can increase the risk for secondary osteoporosis:

What is not usually pointed out is that a woman’s bone loss actually begins in her mid thirties when estrogen levels are high indicating that estrogen does not totally prevent bone loss. What estrogen usually does is slow the rate of bone loss by slightly poisoning the ‘osteoclasts’ thereby slowing down resorption, but it DOES NOT reverse it.

The correlation? Progesterone Levels. When a woman reaches her mid thirties she may fail to ovulate every period (anovulatory cycle), leading to a decline in progesterone production.

Osteoporosis actually begins to set in 10 to 15 years before menopause, around the time a woman begins to experience a deficiency in progesterone. Therefore, the most important factor in osteoporosis is the lack of progesterone, which then causes a decrease in new bone formation.

Evidence suggests that progesterone receptors are present in osteoblasts and that adding progesterone will actively increase bone mass and density and can reverse osteoporosis. Some doctors prescribe conventional HRT in the form of combination estrogen and artificial progestins, or even estrogen alone (if you no longer have an intact uterus).

We know that estrogen can retard bone resorption, however, the accumulated old bone is not good bone and can result in an increase in hip fracture. A marked decline in estrogen levels at menopause can accelerate bone loss initially then, after a few years, this will plateau out again.

Given that many women are making adequate estrogen via their fat cells, muscle cells, and skin, bioidentical progesterone alone may be sufficient to prevent and/or reverse osteoporosis.

Artificial progestins used in conventional HRT are not identical to the progesterone made by a woman’s ovary, and therefore do not do the same work in bone building. In fact, artificial progestins may prevent any real progesterone that may be circulating in the body from occupying bone-building receptors, negating any bone-building benefits as both compete for the same receptor site.

Johnell O and Kanis JA (2006) An estimate of the worldwide prevalence and disability associated with osteoporotic fractures. Osteoporos Int 17:1726.

Liang M, Liao EY, Xu X, Luo XH, Xiao XH. Effects of progesterone and 18-methyl levonorgestrel on osteoblastic cells. Endocr Res . 2003 Nov;29(4):483-501.
The authors evaluated in this study the effects of progesterone (P4) and levonorgestrel (LNG) on markers of bone growth, utilizing normal human osteoblasts as well as the osteosarcoma cell line, MG-63. Their study found that, compared with placebo, both P4 and LNG increased the proliferation and differentiation of human osteoblasts through osteocalcin gene transcription.

Prior JC, Vigna Y, Alojado N. Progesterone and the prevention of osteoporosis. Canadian Journal of Obstetrics/Gynecology and Women’s Health Care 1991; 3(4):178-84.
In this review article, the authors propose that cyclic progesterone both prevents bone loss and acts as a bone-builder. The studies discussed focus on abnormal menstrual cycles as an important risk factor for osteoporotic fractures. Their conclusion is that the first step in preventing osteoporosis is treating ovulation disorders.

Prior JC, Vigna YM, Schecter MI, Burgess AE. Spinal bone loss and ovulatory disturbances. New England Journal of Medicine 1990; 323(18):1221-7.A review of the available data indicates that progesterone acts to promote bone metabolism. It appears to be independent of estrogen by either acting directly at progesterone receptors, or indirectly through competition at glucocorticoid receptors in the osteoblasts.

Lee JR. Osteoporosis reversal; the role of progesterone. International Clinical Nutrition Review 1990;10(3):384-91. Transdermal progesterone supplementation with and without conjugated estrogens was evaluated in a clinical setting using 100 women aged 38 to 83 years. The average time from onset of menopause was 16 years. 63 women were followed for three years with dual photon absorptiometry. Treatment also included dietary changes, nutritional supplements, and exercise. All individuals followed showed an increase in bone mineral density over the three years, with the greatest increase occurring in the first year. There was no difference noted between estrogen/progesterone and progesterone only groups. Subjective changes included increased libido, diminished hot flushes, reduced joint pain, and increased mobility and energy. No side effects were noted during treatment protocol.

Loretta Lanphier is a Naturopathic Practitioner (Traditional), Certified Clinical Nutritionist, Holistic Health Practitioner and Certified Clinical Herbalist as well as the CEO / Founder of Oasis Advanced Wellness in The Woodlands TX. She has studied and performed extensive research in health science, natural hormone balancing, anti-aging techniques, nutrition, natural medicine, weight loss, herbal remedies, non-toxic cancer support and is actively involved in researching new natural health protocols and products.  A 14 year stage 3 colon cancer survivor, Loretta is able to relate to both-sides-of-the-health-coin as patient and practitioner when it comes to health and wellness. “My passion is counseling others about what it takes to keep the whole body healthy using natural and non-toxic methods.” Read Loretta’s health testimony Cancer: The Path to Healing. Loretta is Contributor and Editor of the worldwide E-newsletter Advanced Health & Wellness. Check out Oasis Advanced Wellness and our natural skin care products Oasis Serene Botanicals.