Sulfur ranks as the number three most abundant mineral in the body coming in after the minerals calcium and phosphorous. Almost half of the sulfur in your body is found in your muscles, bones and skin. Sulfur also plays a role in many of your body systems and consuming sulfur rich foods is important.

Sulfur represents about 0.25 percent of our total body weight, similar to potassium. The body contains approximately 140 grams of sulfur–mainly in the proteins, and distributed in small amounts in all cells and tissues. Sulfur performs a number of functions in enzyme reactions and protein synthesis. It is necessary for formation of collagen, the protein found in connective tissue in our bodies. As we age, the flexible tissues in the body tend to lose their elasticity, leading to sagging and wrinkling of skin, stiff muscles as well as painful joints.  A shortage of sulfur, usually from not consuming enough sulfur rich foods or absorption issues in the gut, may contribute to these age-related concerns.

Benefits cellular respiration in the oxidation-reduction reactions that help the cells utilize oxygen aiding in brain function and all cell activity.

Benefits vitamin-B thiamine (B1) and biotin conversion required for converting carbohydrates into energy.

(See “importance of glutathione synthesization” below)

Insulin controls carbohydrate metabolism. When one experiences a sulfur deficiency, it makes it more difficult for the pancreas to produce enough insulin, and makes cells less able to absorb nutrients from the blood, contributing to blood sugar issues.

Acts as the key agent in the effective utilization of amino acids. Four of the more crucial amino acids, methionine, cystine, cysteine, and taurine, cannot effectively function without organic sulfur.

Studies show that sulfur is advantageous for health conditions such as skin disorders, arthritis and shingles, and that sulfur may play an important role in these conditions.

Without sulfur, the body cannot properly detoxify substances such as pharmaceuticals, environmental toxins and heavy metals.

Collagen production in your body depends on sulfur to create healthy skin and heal scars. Sulfur has antibacterial effects against the bacteria that causes acne, removes toxins from the skin and boosts healthy new skin cells. When sulfur levels are sufficient, your skin and hair are more flexible, softer, and smoother.

Sulfur can be obtained through supplementation with methylsulfonylmethane (MSM) and/or by taking Epsom salt baths.

The Power of Glutathione Synthesization – Sulfur

Dr. Mark Hyman adequately sums up the importance of glutathione synthesization:  Glutathione: The Master of All  Antioxidants — “It’s the most important molecule we need to stay healthy & to prevent disease. It’s the secret to prevent aging, cancer, heart disease, dementia & more, &  necessary to treat everything from autism to Alzheimer’s disease. The secret of its power is the SULFUR (SH) chemical groups it contains. Sulfur is a sticky, smelly molecule. It acts like fly paper & all the bad things in the body stick onto it, including free radicals & toxins like mercury and other heavy metals. Normally glutathione is recycled in the body — except when the toxic load becomes too great. This explains why we are in such health trouble & should consume more sulfur rich foods to support the body in healing and repair.”

Sulfur is readily available in protein foods such as meats, fish, poultry, eggs, milk, and legumes. Egg yolks are one of the better sulfur rich foods. Other top sulfur rich foods that contain this somewhat stinky mineral are onions, garlic, cabbage, Brussels sprouts, turnips, nuts, kale, lettuce, kelp and other seaweed, and raspberries. Complete vegetarians (those who eat no eggs or milk) and people on low-protein diets may have difficulty in getting proper amounts of sulfur. It’s important to note that the resulting sulfur deficiency is difficult to differentiate clinically from protein deficiency, which is of greater concern. Also, please make sure that any meat and dairy you consume is grass-fed/pastured and that vegetables and fruits are organic or locally grown using organic standards.

It’s interesting that only two of the 20 amino acids normally present in foods contain sulfur: Methionine (supplied by diet) and Cysteine (requires dietary sulfur for the body to synthesize). The body does not store either of these amino acids. Rather, “any dietary excess is readily oxidized to sulphate, excreted in the urine (or reabsorbed depending on dietary levels) or stored in the form of glutathione (GSH),” according to researchers. (Glutathione, comprised of three amino acids: cysteine, glutamate, and glycine, is your body’s most potent antioxidant and keeps all other antioxidants performing at peak levels.) 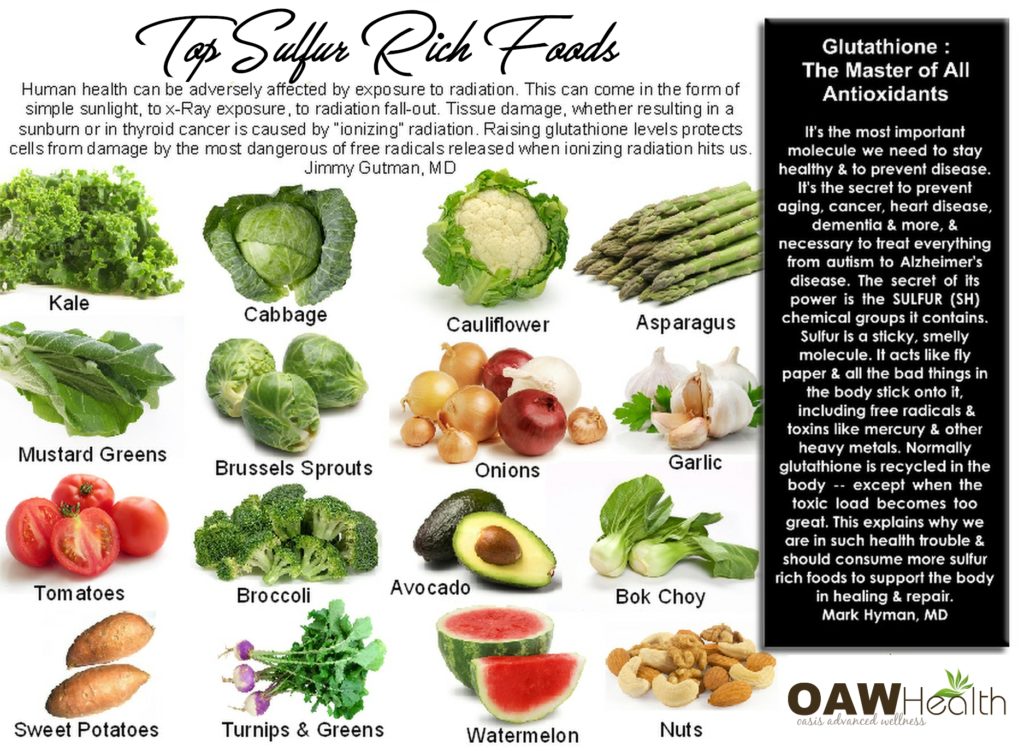 Human health can be adversely affected by exposure to radiation. This can come in the form of simple sunlight, to x-Ray exposure, to radiation fall-out. Tissue damage, whether resulting in a sunburn or in thyroid cancer is caused by “ionizing” radiation. Raising glutathione levels protects cells from damage by the most dangerous of free radicals released when ionizing radiation hits us.  Jimmy Gutman, MD

Organic Sulfur acts in a powerful way to protect from radiation.  Sulfur reacts with radioactive mineral isotopes, turning them into harmless sulfates.  This reaction occurs naturally because of the electrons that are available in sulfur’s atomic structure. After the atomic bombs dropped on Hiroshima and Nagasaki, many of the Japanese people survived radiation poisoning simply by eating their traditional miso soup made from fermented soybeans, sea vegetables like kombu, and root vegetables—all of which are rich in iodine and sulfur.  Dr. Gabriela Segura states: “Sulfur has a long history of use as an antidote for acute exposure to radioactive material.”

Sulfur deficiency is very common, mostly because of the demineralization of soils, and may be a relating factor in health issues such as obesity, heart disease, Alzheimer’s and chronic fatigue, just to name a few.

Loretta Lanphier is a Naturopathic Practitioner (Traditional), Certified Clinical Nutritionist, Holistic Health Practitioner and Certified Clinical Herbalist as well as the CEO / Founder of Oasis Advanced Wellness in The Woodlands TX. She has studied and performed extensive research in health science, natural hormone balancing, anti-aging techniques, nutrition, natural medicine, weight loss, herbal remedies, non-toxic cancer support and is actively involved in researching new natural health protocols and products.  A 14 year stage 3 colon cancer survivor, Loretta is able to relate to both-sides-of-the-health-coin as patient and practitioner when it comes to health and wellness. “My passion is counseling others about what it takes to keep the whole body healthy using natural and non-toxic methods.” Read Loretta’s health testimony Cancer: The Path to Healing. Loretta is Contributor and Editor of the worldwide E-newsletter Advanced Health & Wellness. Check out Oasis Advanced Wellness and our natural skin care site Oasis Serene Botanicals.